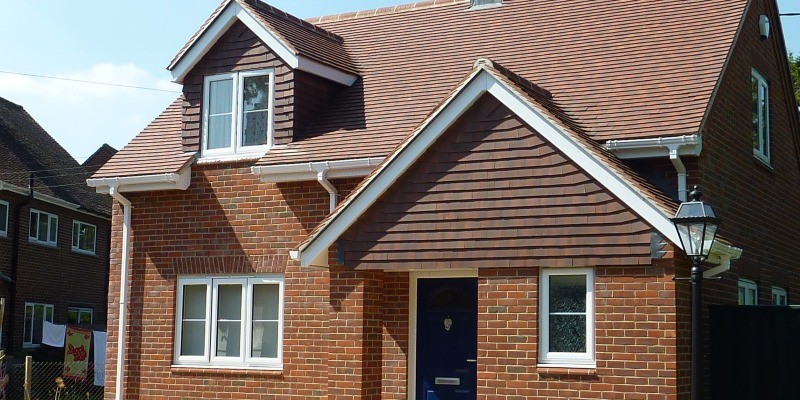 RCC were approached by the applicants who had tried to attain planning permission for residential development within their garden since 1984. During that time they were unsuccessful with seven planning applications of which three had been dismissed on appeal. Those unsuccessful applications included single storey dwellings.

The site prior to development

Achieving planning permission was therefore going to be extremely challenging but RCC prepared a detailed planning statement to accompany the new outline application for a single storey dwelling using the most recent changes in Government planning policy to support the proposal. Having regard to all the issues raised as part of the planning application, together with the lack of objections from neighbours or the Parish Council, the planning officers finally accepted that a dwelling on this site would be acceptable and planning permission was granted under delegated powers.

Having now established the principle of a dwelling on the site RCC subsequently prepared and submitted a full planning application for a dwelling with rooms in the roof space. That application was successful and approved. The house is now built, as seen in the attached photograph.

Thank you so much for dealing with my planning application and I just want to say what a fantastic job you have done.  Quick and efficient and I would highly recommend RCC.

Following work to the perimeter of our Grade II listed property we were informed by Wiltshire Council that we needed planning permission. We applied for retrospective planning permission and engaged RCC to advise us and take the process forward. Thanks to their professionalism, knowledge, expertise and persistence, having been initially objected to, RCC secured permission. We are in no doubt that without RCC we could not have secure a successful outcome.

Having bought the land and used it as an extension of our garden for well over 10 years without any concerns from neighbours or the council, we were quite shocked and upset to be facing a complaint earlier this year. With the welfare of our animals tied up in the success of the applications, the period was very stressful and emotional. Richard and Vicky led us through the process with great care and attention to detail and produced a very high quality set of applications based on sound arguments which was borne out in them being approved at first submission without any concerns raised by the planning officer.