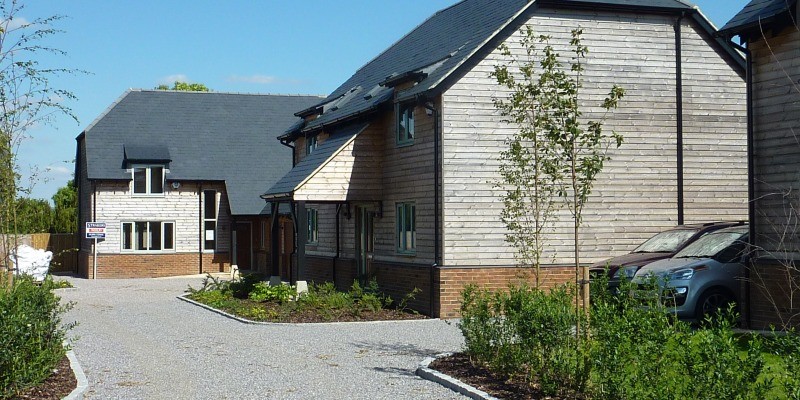 RCC were approached by Strakers Estate Agents as the owners of this old petrol filling station (which was now being used for car sales and vehicle repairs) and asked to help with the sale of the site. Marketing of the site for continued commercial use had been unsuccessful and it was clear the buildings were at the end of their useful life.

Clearly the option of residential development had to be considered for the site but the problem was the site lay outside of a town or village and as such new housing would be contrary to local planning policy. RCC however advised that changes to planning policy meant there was an opportunity to present a strong case in favour of residential redevelopment and that we could demonstrate it was the only viable use of the site.

In order to ensure a planning application could be submitted as quickly as possible, and at minimum costs to our clients, RCC prepared an outline planning application with an illustrative site layout prepared by PKA Architects. This established the principle of residential development on the site. RCC prepared a robust planning statement with that application setting out a strong case in favour of the proposal which was subsequently approved under delegated powers within 8 weeks.

The site has since been sold and a detailed application was submitted for the four new dwellings, which as you can see from the photographs, have now been built.

Photographs of the site before the development

Following a long neighbourly dispute about the use of our garden outbuilding we engaged Richard to apply for formal permission to use the building as a holiday let. Richard and his assistant Rachel drew up a detailed planning statement and followed through the application process and resulting queries in a thoroughly balanced and professional manner. The outcome was positive and I have already recommended RCC to others.

We retained the services of RCC Town Planning Consultancy to assist us in preparing and submitting a retrospective planning application to change the windows and a couple of other issues in a building that although not listed, apparently fell in the curtilage of neighbouring listed buildings.

The team are highly experienced and produce a professional, complete planning statement leaving absolutely nothing to be challenged. We dealt primarily with Vicky who kept on top of any comments posted, supplying responses where necessary and keeping us informed at every step.

We had a positive outcome on our first application and  would definitely use Richard and his excellent team again. We would not hesitate to recommend them to anyone requiring planning assistance.

We are very grateful for your efficient and very professional service to steer our planning application to a successful outcome. Considering that it was far from a straightforward case it proceeded to a satisfactory conclusion without any holdups.

This was entirely due to your comprehensive build of the case and the detail and foresight in covering all angles. Needless to say we would recommend RCC Town Planning to anyone without any hesitation.